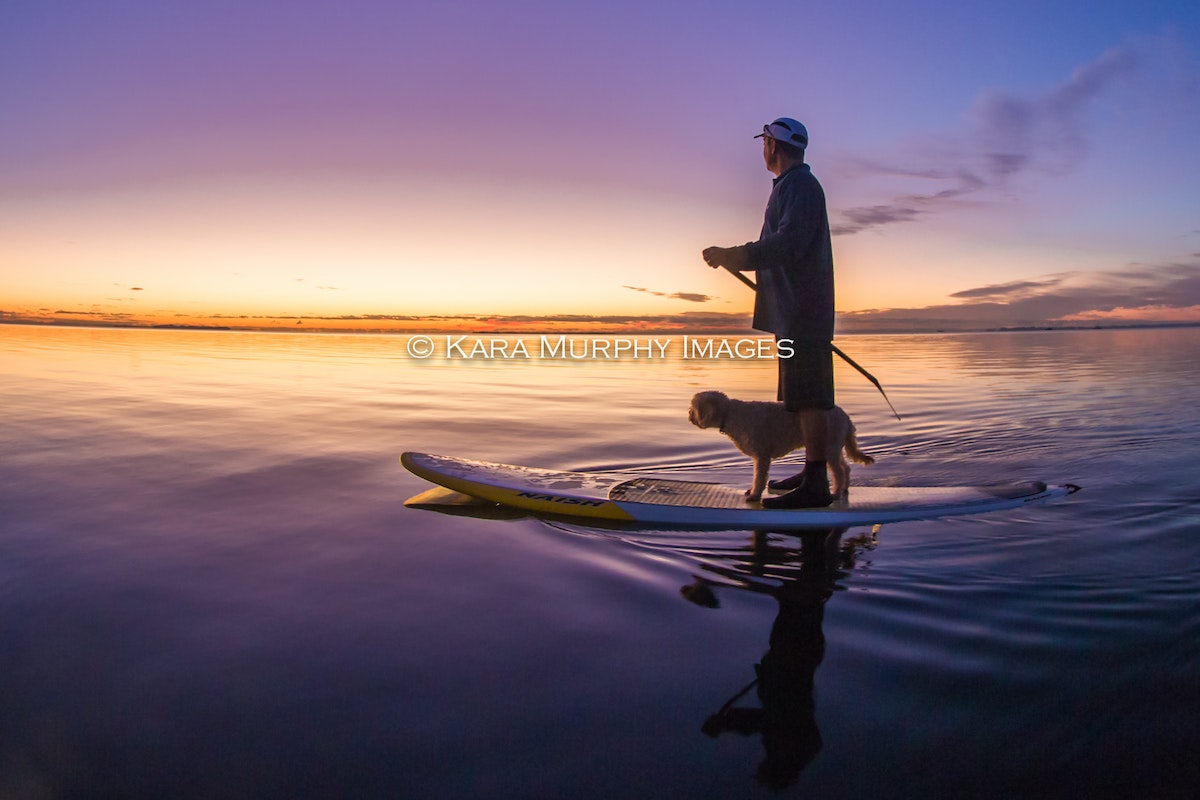 The evening’s final star slumbers as a slender orange glow spreads across the horizon, climbing higher and wider across the violet water with each passing moment. A heartbeat after my stand-up paddle board (SUP) touches the water, my elderly dog – a golden-coloured Cavoodle – steps onto it, his movements masking his age and his smile revealing the joyful enthusiasm of a puppy. Together, we glide out onto the bay’s purple expanse, my seasoned sea dog perched close, breathing in the salty air, silently anticipating sunrise, and scouting for whatever wildlife we’re fortunate enough to see.

This is one of the best ways I know to embrace a new day. Though it’s not as regular of an occurrence as I’d like (getting out on the board depends on tide times, wind, and other conditions), the instances when we can ‘walk on water’ together are enough to instil a sense of peace in my soul, just knowing that connecting with the natural world in this way is possible.

Moreton Bay Marine Park, on Brisbane’s doorstep and stretching 125km south from Caloundra to the southern tip of South Stradbroke Island, is where I’ve spent most time on the water. The marine park is expansive (3400 square kilometres), extending three nautical miles seaward from North and South Stradbroke Islands and Moreton Island; however, we’ve always stuck close to the mainland, favouring the edges of the mangroves and seldom venturing much more than 200 metres out. 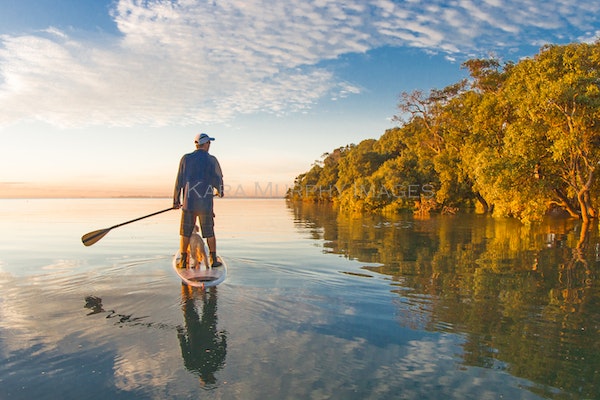 Mangroves provide nutrients for seagrasses, which offer food and habitat for species such as green sea turtles and dugongs. We’ve witnessed green sea turtles (sometimes a dozen or more) almost every time we’ve paddle boarded here. The ancient mariners briefly rise for air after feeding in the sea grass meadows and sometimes swim past my board, visible in the clear waters. 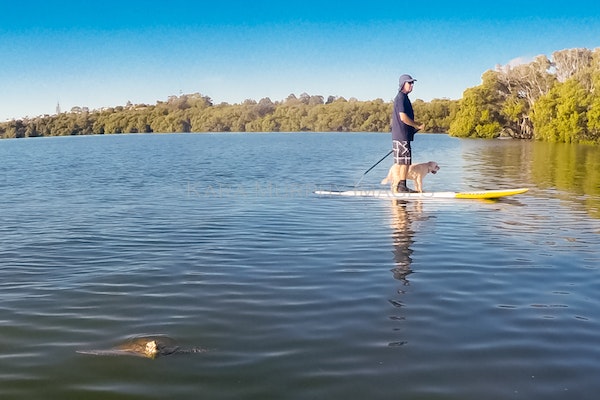 Several years ago, we found a juvenile green turtle stuck in the mangroves, entangled in discarded fishing line. My husband had a pocketknife and was able to free the poor turtle, which quickly swam away. We were thankful to have come across the trapped turtle in time to save it, and the experience highlighted how important it is for people to clean up their fishing gear and keep it (and all other rubbish) out of the ocean. 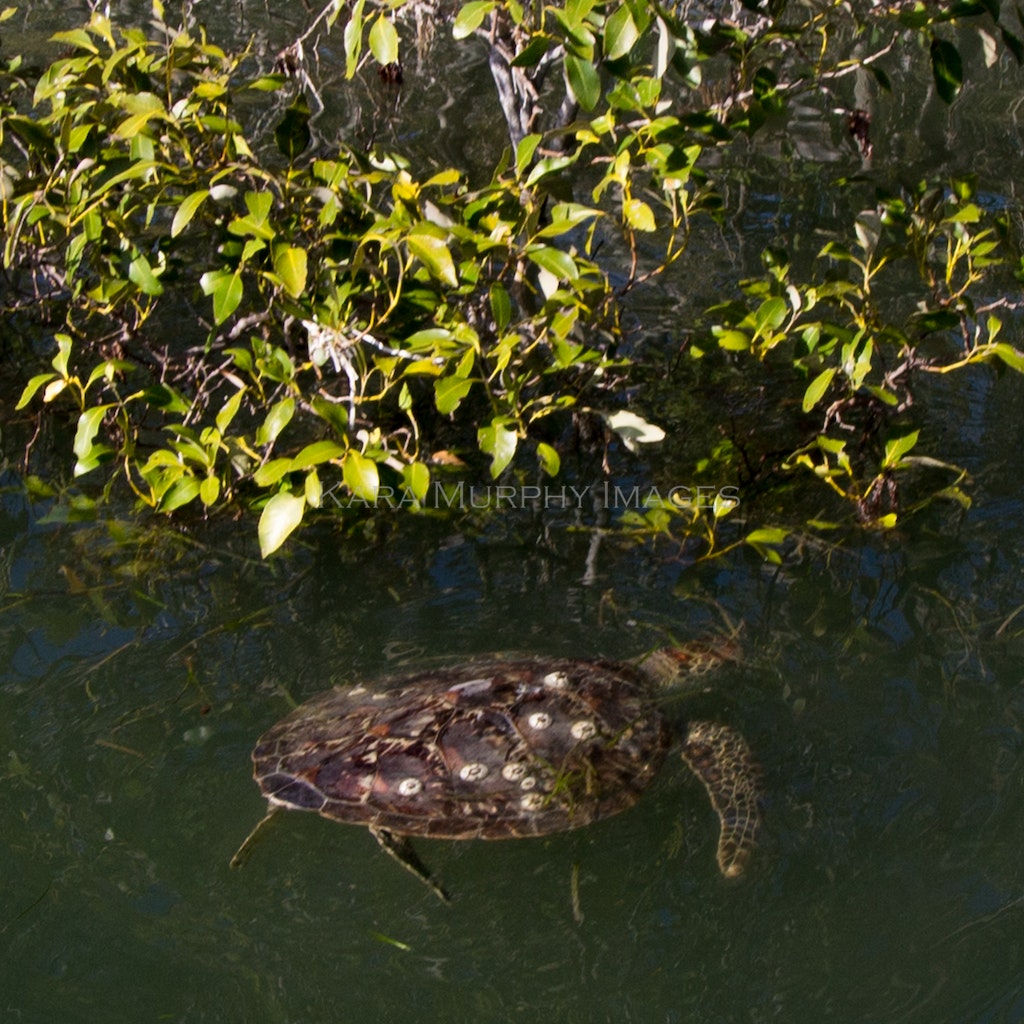 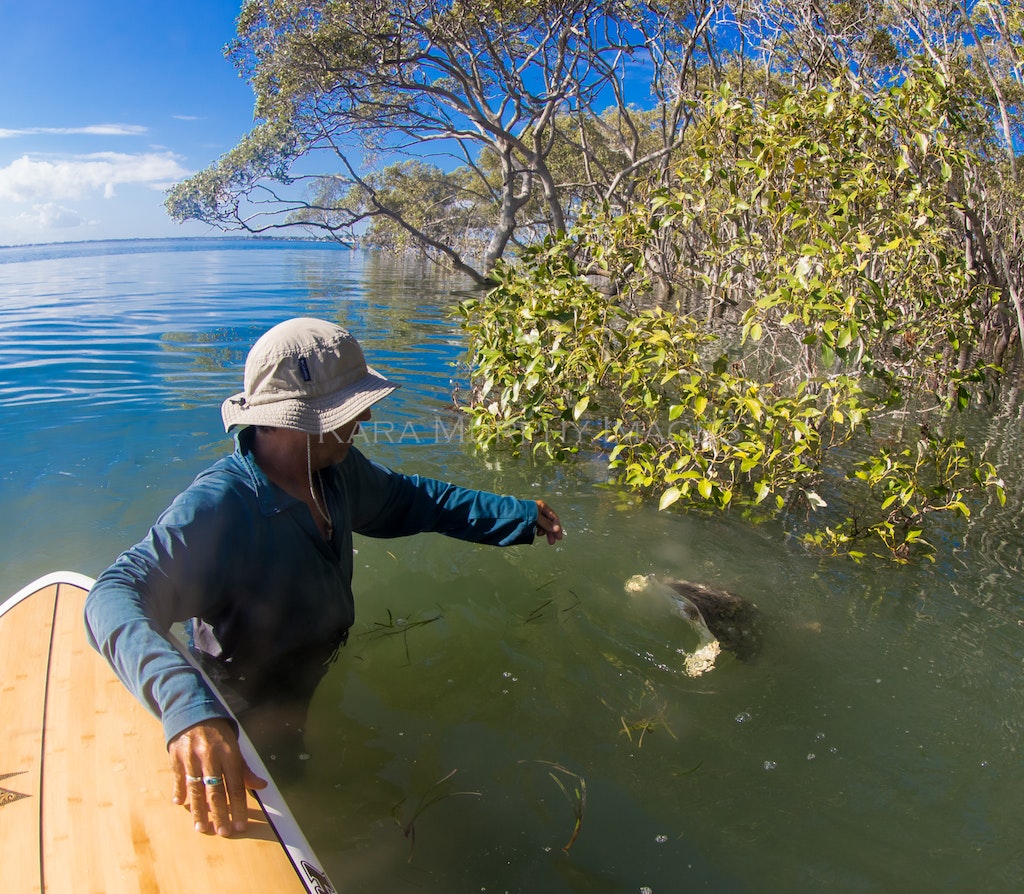 A few months later, my husband was out on the bay again with our dog, and a juvenile turtle came up for air near the front of his board. Rather than hurriedly returning to its underwater realm (as turtles usually do), this one ventured closer and placed its head briefly on the board, gazing for a moment at our transfixed dog, before sliding off and disappearing. We like to think this was the same turtle we freed.

We often spot stingrays as well and, when we’re really lucky, a bottlenose dolphin or one or two of the 600-800 dugongs that live in the marine park. Also known as sea cows, dugongs can grow up to three-metres long, can weigh up to 400 kilograms, and eat up to 7% of their body weight per day. On calm days, you might see this vulnerable, protected marine mammal when it comes up for air, and on extremely still days, you might notice the imprint they leave on the water as they progress through the seagrass beds.

Dugongs are susceptible to boat strikes when they rise to breathe, meaning boats need to be on the lookout for them and go slow, particularly in shallow waters. This map (on the marine park website) shows designated Go Slow areas; however, as they’re found in other shallow areas, too, it’s important to be vigilant everywhere. (You probably won’t be going too fast on a paddle board, but keep a look out anyway.)

If you’re fortunate to witness marine life while paddling, let the animal go about its business and don’t interfere with its movements or chase it. If you realise a dugong is feeding near you, stop paddling for a few minutes and observe. It might come close to you on its own and continue feeding in the area around your board … or it might swim away.

The following video includes a dugong sighting … and plenty of shots of our beautiful sea dog enjoying being on the board.

And this video includes a dugong imprint (at 0:06), some spectacular sunrises, and a rainbow, all witnessed while paddling on the bay.

Moreton Bay prints/wall art featuring some of these images are available to purchase.